No line on the horizon 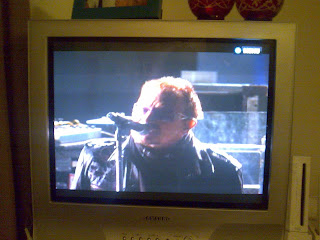 My days have been blurring into a haze of U2. Earlier in the week I was entering myself into ticket ballots and sending in questions to ask the band (no joy). Yesterday was spent chasing them around various BBC radio stations (via my DAB dial, not on foot) and then camping out in the sitting room waiting to 'push the red button' on my TV when they appeared on the roof of Broadcasting House at 6.30pm. As they appeared I was shaking, every hair on my body stood on end and I am not sure I took a breath for several minutes.
I think I was calmer the one and only time I have seen them in concert although as I was very nearly in the toilet as they came out I think I was just relieved.
If this all sounds a little odd for a mother-who-turns-40-this-year remember I am the first-born of a woman who didn't get off the sofa for several days when Elvis died. Turning to music and a strong frontman to make the world a better place comes very naturally.
In this morning's post was their new album. It is not released until Monday so thank you Amazon for giving me a headstart on all those nobodys who think they love Bono more than I do.
I haven't actually got much further than the first two tracks as my time is just not my own anymore but one of them seems to be on repeat in my brain. Perhaps 'nappy brain' is all a fallacy and you actually become better at absorbing information?

Today was a beautiful day (no more U2 references, I promise) so it was lovely to get up to the allotment and do more digging - will it ever end? To compensate for all that fresh air and activity Emma and I took the children to Pizza Express on the waterfront and Archie let slip his future ambitions. 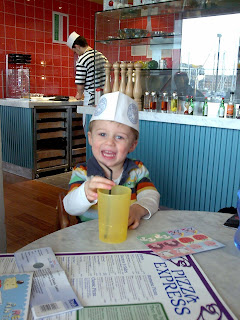 Scarlett-Watch .... she woke up yesterday morning with the ability to crawl perfectly, her day sleep is still a little hit and miss and she may have been exposed to the chickenpox virus during our pretty day with Hesper, Mabel and our knitting. Taking into acount the incubation period, there is an outside chance that she may be Spotty Muldoon when we go to stay in Norfolk.