One man's messy wardrobe is a baby's paradise 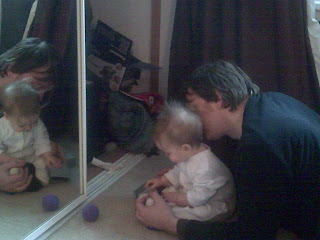 Our morning started with a game called Retrieve the Cufflinks (above). Dan's half of the wardrobe is probably exactly the same as the wardrobe of his 13 year old self i.e. pile it high and slide the door across. Except, he never slides the door so Scarlett, perfecting her caterpillar, slither and roll approach to locomotion, had a great time rummaging through a range of items most of them probably very unhygienic. That'll teach him ...
For a second, well perhaps two seconds, I really thought we were going to have some of the snow that is causing 'serious disruption' everywhere but here. Big blobby flakes came down thick and fast for at least a quarter of an hour but melted as they hit the pavement. What a waste.
So we headed off to swimming. The journey today seemed quite eerie as I noticed the pathologist in last night's Killer in a Small Town (Channel 4) was driving along the same route as he was being interviewed about the murders. Watching the programme last night took me back to how we all felt at that time - fascinated, horrified and eventually very jumpy.
Anyway our Little Mermaid took the class in her stride and even let me do a few dips under the water.
The only other event of my day was going into town to fulfil an overwhelming desire for Salmon Teriyaki. This wouldn't seem strange , or even worthy of a mention, were it not for the fact that I have been vegetarian for 25 years. 'Luckily' I was unable to find such a dish so pie and veg it is.