How it is to be a mother 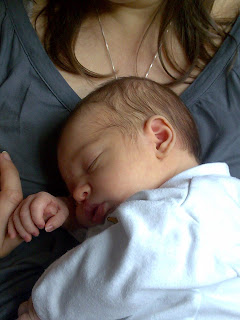 In yesterday's Times there was an article on the conspiracy of silence about motherhood. Much of it wasn't new (to me anyway) but the newsreader Mary Nightingale had written the following that Dan read to me as I tried to dry my hair, put on make up (one-handed), amuse Scarlett, finish my cold tea and check my watch (at which point I realised I was late for work).
"If only I'd realised that no matter how hard I battled, I would lose control of my life. Before I had children I think I believed that, with a little discipline and organisation, I could be in charge. I couldn't grasp that motherhood isn't like that - you can't schedule croup or projectile vomiting [insert viral infection and FOUR top teeth]. You just have to go with it. I fought that randomness for a while but I've admitted defeat."

Sometimes the sense of chaos, the terrible feelings of guilt and the loss of me-time overwhelms me. I'm not sure how to get to the point of admitting defeat and what that would entail so I battle on.

The current topic for debate is who is going to work on what days. I thought we had got closer to the perfect arrangement when we (or was it me?) suggested not working on Tuesdays so we could have a family day. There has now been a Dan-Shaped Spanner thrown in the works by him suggesting he would prefer to work Tuesdays but not Saturdays. This is all well and good but how am I going to work enough hours to contribute just under half of the bills account?
Let alone have some money for me. I really am a bit bored of 'looking after the pennies so that the pounds look after themselves' (Where are the pounds? Down the pub?).
I had a moment today with a piece of paper and a pen so I drew a timetable of our week - who is working when, what jobs need to be done on what days and where Scarlett is supposed to be.
You see what I mean about control!

Add into the mix my realisation that all my clothes are shapeless/tired/out of fashion/holey (Dan and Scarlett bought me 7 pairs of socks yesterday, oh and some lovely pink tulips) and you can kind of guess where my head is right now.

On a brighter note, I used my piggy bank savings (and a cheque that I hope won't bounce) for a leg wax and facial which was a wonderful use of a sunny afternoon. I have also discovered an amusing podcast by a woman who goes by the name of She-Knits so whilst Dan was nursing the start of Man Flu and Scarlett was asleep I postponed the chaos to listen to my iPod and eat a fried egg on a piece of toast with a token sprinkling of salad leaves.