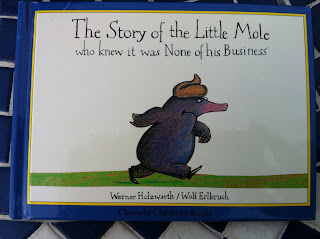 Today we went to see one of my favourite books on the stage. I was introduced to this book by a close friend, a while before I had Scarlett. I think I bought her husband a silly book about poo, so they gave me this in return.

The story is as follows - a mole wakes up one morning to find someone has done a poo on his head. He seeks out the offender, but not before each animal has shown him their 'business' to prove it was not them. Genius.

The last time this production came to Ipswich, Scarlett was too young so I was determined to take her this time. Both showings were sold out so I was pleased to have managed to get four tickets and have been looking forward to it very much. Scarlett loves the book and the simplistic 'Poo Head' is all her own work.

So off we skipped this afternoon to meet the friend who introduced us to this gem. This is the second time I have been to see a children's play at the New Wolsey Studio and both times I have wondered how they will turn a short book into something long enough to be worth seeing but engaging enough to keep three year olds happy.
The Kipper Tie Theatre were excellent at performing the adaptation. We laughed at the hare, sang with the cow, waved to the goat and then found out who did the deed via two Cockney flies.
The flyer calls it a 'Poodunnit'; haven't I done well not to tell you who did?

A Good Yarn said…
Oh, yes! How I love that book, particually the illustrations. It's the moles indignation as he points his sharp little accusing claw at each suspect that makes me smile.The daring of being treated to a poo demonstration is, of course, the books secret highlight! So glad that you enjoyed the full length show.
Karon x
6 April 2011 at 08:44