From ten rods to five via a bit of denial 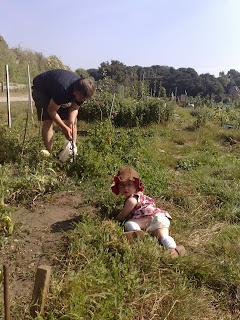 The photo above was taken in 2009 and shows my allotment and its Grass Problem. The situation has not improved and as I have been working the plot on my own since we got the pub, the grass has just got worse and worse.
I took the big decision at the end of the summer to give up half of my plot. Admitting I can't do something isn't one of my skills so it was a culmination of pressure from the Field Secretary (which I initially resented) and a tiny inner voice wondering what it would be like if I had something more manageable.
In November, I met my prospective partner. We agreed a staggered half so that I didn't have to move my fruit trees.
A week later, I arrived to this: 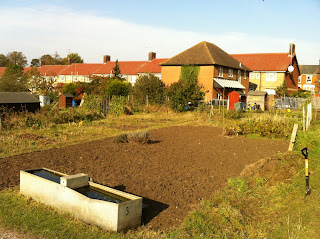 My shed was so organised I was initially a little put out - it's a control thing - but then over the next few weeks, the shed was rebuilt, repaired and painted. The paths were trimmed and the junk removed. A path was laid and the nettle bed removed.
This spurred me on, and I started to remove all the grass from between the beds. With my little helper of course. 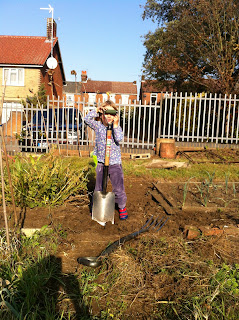 My new partner has nothing more to do than keep digging up any weeds that appear in his half so he has started to help me wage war on the grass. Amazing. This has freed me up to also cut back the asparagus, tidy up the blackberries, plant the young strawberry plant runners.
Now - for the first time - I have a plot that I look forward to seeing each Sunday. 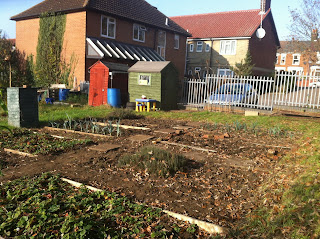 fabriquefantastique said…
Did not know D was a publican. I come from a pub family and always lived above the shop.
23 November 2011 at 20:43