A six year study of an allotment


Year One
The week after I signed on the dotted line, I found out I was pregnant. It was August 2007 and the weeds were rampant with no produce to worry about except the odd potato. I wasn't sure if I could dig so I tried to cut the grass back and relied on family members to do the digging as and when they could fit it in. With a little bit of persuasion, my husband and his father built some 'raised' beds using panels recycled from an old shed. People were happy to chat to the men as they worked, whilst I seemed to be the object of much interest and derision.
I planted leeks, strawberries, blackberries, raspberries, apple trees and thyme plants. 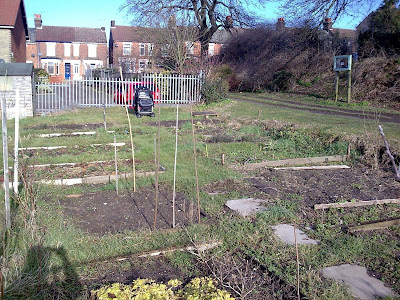 With the arrival of Scarlett came the realisation that the plot was a huge commitment but Dan's parents mucked in, some friends took over a couple of beds and we just about got away with it in time for the Field Open Day.
Our strawberries were delicious and we made jar after jar of jam.
The raised beds started to sink but I simply regarded the edges as boundaries. 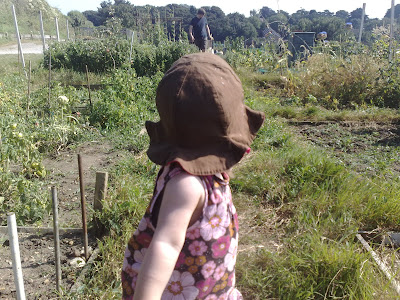 Waterproof dungarees, a Barbie watering can and some wellies were introduced to the shed when really we should have bought a strimmer. Scarlett was on the move and shaking the apple trees as if they had coconuts attached became commonplace.
I misjudged the frosts this year and lost everything - twice.
This was my first year of growing sweet peas and it was a tremendous success. The problem was I didn't visit often enough to make the most of them so they soon faded.
It was around this time that the length of the grass between the beds started to keep me awake at night. I just couldn't go up as often as everyone else. 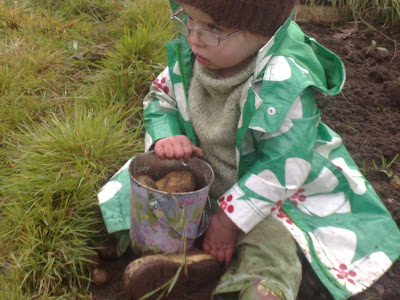 I was much more organised this year. All my crop rotation plans came together and I planted cucumbers, tomato plants, runner beans, beetroot, potatoes, squash, purple sprouting broccoli, sweetcorn, turnip, onions and leeks.
Only one beetroot grew, I lost all the tomatoes to blight, not a leek came up and all the runner beans and squash were eaten by the slugs and snails I refused to kill.
My helpers became too occupied with other projects, but I felt quite on top of things. 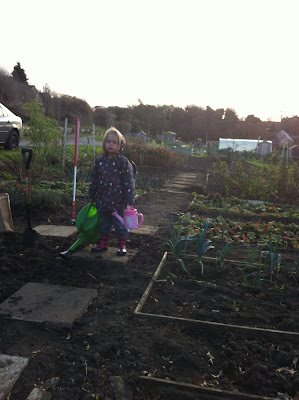 This was the year I received 'the howler' from the Field Secretary about the state of my plot. Some might say I should have had it much sooner. I knew it was coming. The grass had grown to waist height so the crops underneath were no longer visible. He wasn't aware that I had arranged for the plot to be strimmed in time for the Open Day.
As my plot was at the top of the field, I knew that he was right to be cross, but I took a deep breath and tackled him back anyway (he had said that my life was out of control, after all). We compromised and I agreed to give up half my plot. The man who took over, literally took over - leaving me with no grass, no weeds and the most perfect plot I had ever seen (see above).
Incidentally, the Field Secretary and I became good friends. 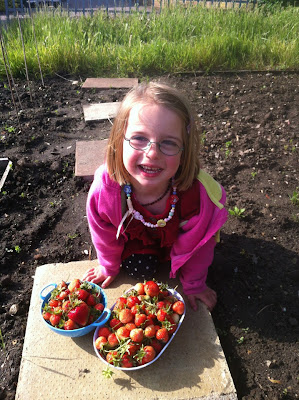 A tough year for me personally and I think it is fair to say that the allotment has helped to keep me sane. There is nothing like a morning digging to feel less frustrated or angry.
Nothing grew too well, although we had a glut of strawberries - as you can see.


As our home life adapted to the rigours of running a pub, so the time that we have as a three has become squeezed into mornings. With the onset of school this time has become shortened further so trips to the allotment at the weekend were very obviously becoming time away from my family.
Numerous jobs to do at the allotment were always on my lists, and I often suffered that niggling feeling that usually turned out to be Allotment Guilt.
When I recently found out I was pregnant for the second time, I realised a few commitments should go once I was on maternity leave - and the allotment was one of these.
Once I lost the baby, I had to deal with many feelings but one of the things I could do was to act on the decisions I had already made.

So today I handed over the keys to the lady who owns the other half of my original plot. She has recently lost her husband so needs to keep busy, she has chickens who will love the grass that used to keep me awake at night and she now has two sheds - one for the chicken feed and one for her tools, many of which I have left as I inherited them.
I wasn't sad as I left, I know I will be back for their Open Day and I will still be in touch with them all through AGMs and the Awards Evening.
I have one less thing to feel guilty about, and that feels good.

C S said…
Wonderful post and reflective look-back. Life (and allotments?) do go in phases and stages - I'm impressed you stuck it out for so many years! Good on you, and best of luck with new adventures going forward.