When Scarlett returned to school I felt a little sad, we had enjoyed a really long and good summer and she is really good for me in that I try new things, laugh more and can even be a little bit adventurous.
Despite a very busy summer, I also realised that there were still a few places we hadn't found the time to visit.
I wondered if I could combine the two postively so I suggested a Thursday Adventure. The rules are simple - just the two of us and we must be home by 6/6.30.
Scarlett loved the idea and created a special tin and then we both wrote our ideas down and put them in, reasonably secretly.... 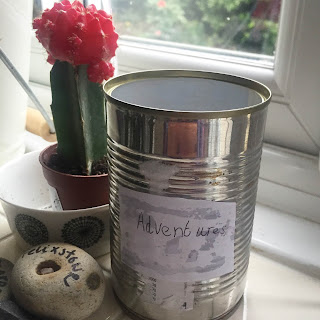 Last week was the first week of school so the first Thursday Adventure. Scarlett picked first and selected..... 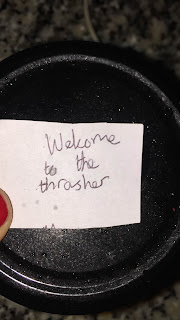 Now, call me a snob, but I do like really nice food and The Thrasher is just about the lowest on my list of places to try. Over the last three or four years we have driven past the pub at least once a week. It has a play area, and large tree to climb as well as an occassional bouncy castle.
Best ever Pester Power!
I could fob her off no more so we headed there - and had quite an experience. The staff were very friendly but the service was slow and disorganised, the place was clean but our plates were left for so long that we had a wasp settle in and eat quite a chunk of my leftovers. Scarlett made some friends, got to climb the tree and played football whilst I used the time to do a little bit of reading in the sun.
As for the food.... mine was inedible (really bad) but Scarlett said hers was delicious: 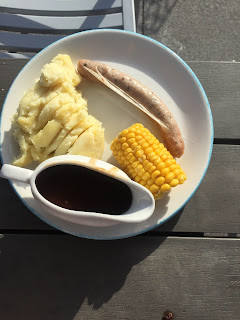 What is that skin?!


So this week, Scarlett picked out one of my adventures which read 'Jump'. This could be interpreted anyway but we decided to try Flux Freestyle for some trampolining as it has only been open a short while and this activity seems to be all the rage (according to Radio 4 any way). 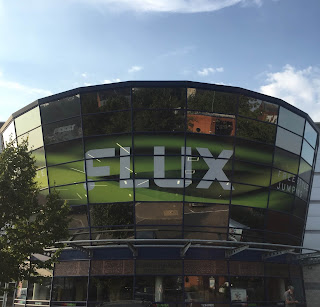 We totally loved it - although we were worn out after fifteen minutes! You get a special pair of socks and there is so much variety - who knew you could trampoline on your back, looking like you are climbing a wall?


[By the way I have completely stolen this idea from Gretchen Rubin's book 'Happier at Home' - although the picking at random is my own twist - a bid to be less controlling.]
Labels: Family life Self-care