Why Cheltenham makes me mad 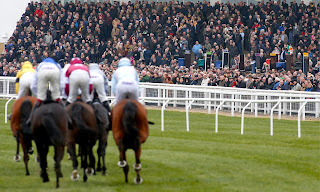 Three years ago, today, my Dad died. It was Gold Cup day. He had become progressively worse as the week progressed, so his death was a shock, but suspected to a certain extent. The most difficult part of the whole thing was my husband and brother being at Cheltenham that week. As Dad’s health worsened, I could not call them because I knew that after midday alcohol was being consumed in great quantities (who wants the responsibility of telling their loved ones they should come home when the only way out seems to be by car?). So, the week carried on and eventually it was down to me to make the dreaded call to say he had died. The worst call I have ever had to make.

Having a festival with no spectators has given us a chance to take a breath. My brother is mourning my father’s anniversary without the heady self-medication mix of gambling, mates, and booze. My husband is making the best of the situation with whatsapp groups but is clearly tiptoeing around the topic for fear of standing on the minefields I have cleverly hidden throughout our conversations.

Taking the obvious self-indulgent nature of the festival out of our lives has enabled me to see that Cheltenham has become an inanimate event I have pinned my grief onto. I have been so angry with the two significant men in my life for leaving me alone when the other one died - but I have not told them that. Instead, I have created a very furious monster around Cheltenham who has tried to shame them into not going, voicing concerns around gambling addictions, trying to rationalise with them by pointing out all the failings of the industry (Gordon Elliot providing more fodder – sadly) and not speaking in the days preceding, nor whilst they are there.

Grief is massively complicated and family dynamics are a mind-field. When the two collide around a monumentally self-indulgent week away, there is no space for rational discussion. Needs are not voiced, and defensive responses abound. Relationships are judged harshly, and belief systems become further reinforced.

The answer? For me to acknowledge I can do nothing about the racing industry, nor can I change the behaviour of these two important men. All I can change is my reaction to the situation and to be open about my needs and feelings. Perhaps covid has drawn the line we all needed.